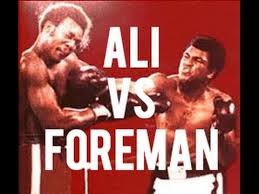 “The Rumble in the Jungle” was a historic boxing event in 1974 between undefeated heavyweight champion of the world, George Foreman and challenger, Muhammad Ali, former heavyweight champion of the world. Ali would win by knockout, flooring Foreman just before the end of the eighth round, arguably calling this the greatest sporting event of the 20th century. I recently watched this event on YouTube, and actually I must agree that it was pretty good myself.

In several interviews to come with various sports commentators, the no longer undefeated Foreman would admit his over-confidence going into the ring. The younger Foreman wondered if he should be merciful towards the 32 year old former heavyweight, Ali. After all, Foreman knew he had never lost before. He talked to commentators about how he pounced on Ali’s neck, harder than ever while he had him cornered in that ring. But about the seventh round, after hitting Ali in the jaw, Ali whispered to him and asked, “That’s all you got, George?” Foreman told commentators that at that moment, he realized “this ain’t what I thought it was.” His strategy would not work, as he went on to lose, and that for years, he thought that he had been cheated. Whereas he had regret and revenge on his mind all of that time, one thing was clear, he stated. He could not win that match again, and so he had to let it go.

For those of us who are believers of faith, many are familiar with the biblical account of God’s promise to Abraham. His name would be great, and he would be the father of many nations. He and Sarah would have a child, and they would name that child Isaac. The kicker was that somehow all of this was supposed to happen WELL into their “seniorhood.” But as time passed and greater anxiousness set in, Sarai decided to “help” that promise along by arranging a “hook-up” in her house. Abram, being the generous and loving man that he was said, “Sure honey,” and agreed to his wife’s request to have a child with their “house-help,” Hagar. Yes, I may be exaggerating a bit – I know! But in short, after she became pregnant, things turned very ugly. Sarai then blamed her husband and recommended that the “house-help” be put out. Imagine that, right?! As God would have it, Hagar was instructed to return back to that house and submit to Sarai’s authority, but not before He announced a blessing over her and proclaimed a promise concerning her son, Ishmael, as well. Could you imagine the thoughts going through her mind? “Tuh, you want me to return AND submit to that woman?” And quite honestly, I would have been beyond livid myself. However, deep down, I know that these two acts are always the steps to restored peace and joy – for me, anyway.

So what am I getting at in today’s blog? What does George Foreman, Muhammad Ali, and some boxing event have to do with anything that I just mentioned? Just hold on for a second, I’m getting there. I think that sometimes our experiences between the “dash mark” and that “space of time” from when a promise is spoken and the attainment of said promise, have a way of morphing our expectations over time – if we’re not careful. Life happens so many times for us and when it does, it has the potential to etch away at the hope that a better “this or that” is coming. We become cynical in our expectations of the promise and settle for a less than desirable outcome and sometimes compromise standards.  We tell ourselves that “we’re good,” while secretly hoping another disappointment isn’t brewing around the corner. We begin to settle for lackluster jobs, “he or she will do” kind of relationships, humdrum marriages, and the list goes on. Sometimes, we stop thinking that “it” will happen for us, our moment has passed, and our experiences scream louder than the promise.

I know because I was there. Just as Abraham and Sarah, I was trying to figure out how the promise was to happen. I would find myself trying to help bring things to pass because I felt like it wasn’t moving fast enough. But then when my efforts failed on numerous accounts, I blamed me for my decisions, trying to figure out where I “missed” it. Unconsciously, I didn’t realize that I had slowly start to relinquish my rights to my promise, based solely on trepidation and apprehension of not wanting to relive another poor decision. To be transparent, I stopped fully believing in MY PROMISE. How could I expect to receive anything when I stopped believing Him and started believing “my” truth, which was rooted in my experiences, and not His truth? He had not and has not changed His mind concerning His plans for me; but I did, until I went back to the FIRST thing He told me. I had to remind myself that if it didn’t line up with what he had shown me and I had heard from him, then I had to blow the whistle, reset, and re-examine the fruit. And if I do “miss it” again even now, I’m still grateful that He knows how to take my big mess-ups and make them an even bigger message to perhaps help someone else. I’m thankful that His promises never change for Keshia, and that they are “yes and amen” in Jesus alone.

I’ll leave with this. I’m not knocking anyone who says “Any way you bless me Lord, I’ll be satisfied.” I WELL know that if He doesn’t do another thing for Keshia, He has already done enough! And yes, that’s a blessing in itself. BUT what I will say is that Jesus also came that we may live this amazingly, abundant life while we’re here as well. This is His truth, not mine. You see, there is A BLESSING. Then there is THE BLESSING. Ishmael was A BLESSING according to His word. But Isaac was THE BLESSING according to the original promise. I have decided that I want THE BLESSING. When your life experiences start talking louder than THE TRUTH, maybe you should take a lesson from Muhammad Ali, shrug it off, and say to it, “Is that all you’ve got?” And for everything else that has been promised and isn’t here yet, well that just means that I’m not exactly ready for it – so I will wait unapologetically.  Remember there is nothing wrong with good. But better is always best.

I would love to hear from you. But in the meantime, I am reminded that I am simply Godzgurl, made in His image, and living life His way!